The Travel, Stories and Photos of Mark Prinzinger 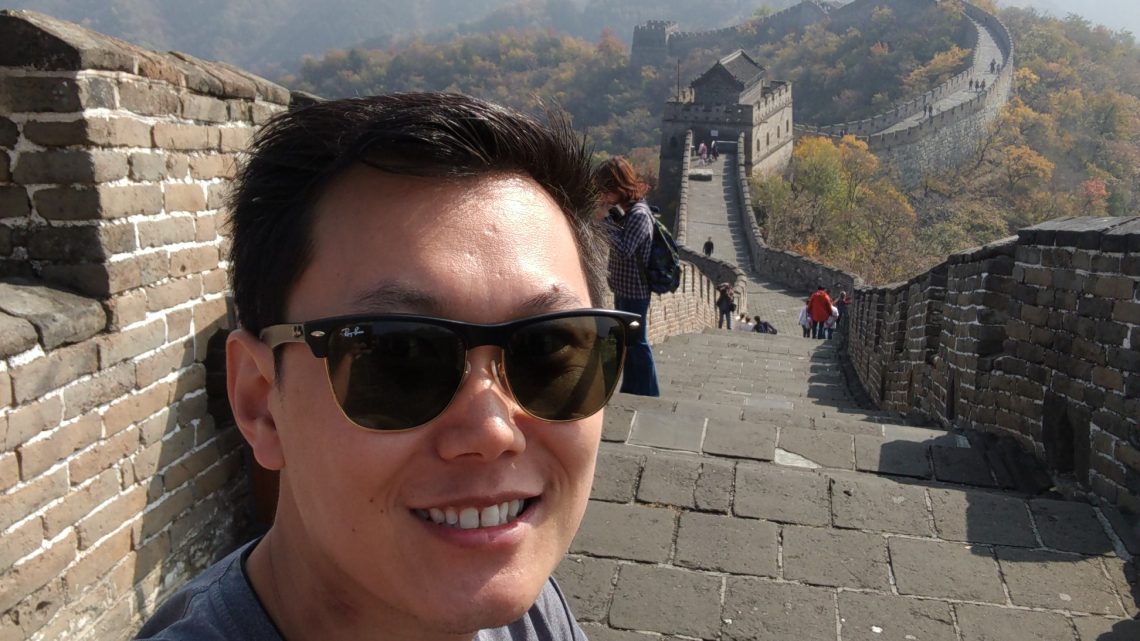 Travelling to China – Tips and Tricks

This may be the best time in a generation to visit China. The dollar against the Chinese renminbi (referred to commonly as yuan or kwai)  is nearly 7 to 1, making your US dollars go much further. Most major US airlines have daily flights to both Beijing and Shanghai that they need to fill. And new technology is making it easier to traverse this ancient country.

While many people may be hesitant to travel to China due to such diverse cultural and linguistic differences, these fears should not stop you from a budget friendly, culturally rich trip.

Last year I discovered I could fly to China from Philadelphia for less than the cost of a Rimowa suitcase. About $600 round trip. This lead to a trip to Beijing last October, a trip to Shanghai and Hangzhou in April and a trip back to Shanghai planned for this November. With all that travel to China, here are some tips and tricks for making your trip smoother.

How to Pay for Things

One of the first thoughts when traveling is how you will physically pay for everything. You know, tipping a driver or buying lunch. When in China you find out quickly that pretty much no one accepts Visa, Mastercard, Amex, etc. and everyone from street vendors to your hotel takes a thing called WeChat Pay.

WeChat is the largest social media network in China. Everyone has it and chances are you will have it on your phone before you leave China if you do any socializing. But they have a feature built in the app that lets you pay for things. You scan the QR code of the person or place you are trying to pay and send them funds. The catch is you need a Chinese bank account to set up WeChat Pay. Point being don’t waste your time trying WeChat Pay even though this seems like the most logical way to pay for things while in China.

The next thought is that most big banks will let you order foreign currency ahead of time. However, you will pay a premium for this service.  The conversion rate that you will get for your money will not be as favorable as if you exchanged your money in China. A friend of mine ordered money from a large US bank for his trip to China and with the currency conversion lost about 12% of the value of his money. That may not sound like a lot but say you plan on spending $1,000 while in China, do you really want to give $120 of that to your bank before you even leave?

For the best bang for your buck I recommend the following to convert your money. Use your bank debit card in a Chinese ATM to withdraw funds. Check with your bank before you leave but most banks simply charge you a foreign ATM fee. For my banks, Wells Fargo and PNC, I was able to get money out of ATMs at the actual daily exchange rate paying just a $5 foreign ATM fee. Although you will most likely only be able to pull $300 per day out this way, $5 on $300 works out to a fee of just 1.67%.

Very important note on pulling your money out of an ATM. There are hundreds of different banks in China and you will go mad trying to find an ATM to give you money with your US debit card. I can attest to this after trying dozens of different ATMs on my first trip to China. Even banks like RBS and Bank of China will not accept your US debit card. The only bank I found to accept my Wells Fargo or PNC debit card was the China Construction Bank. They are a large bank and have branches everywhere. Just look for their blue and white signs. 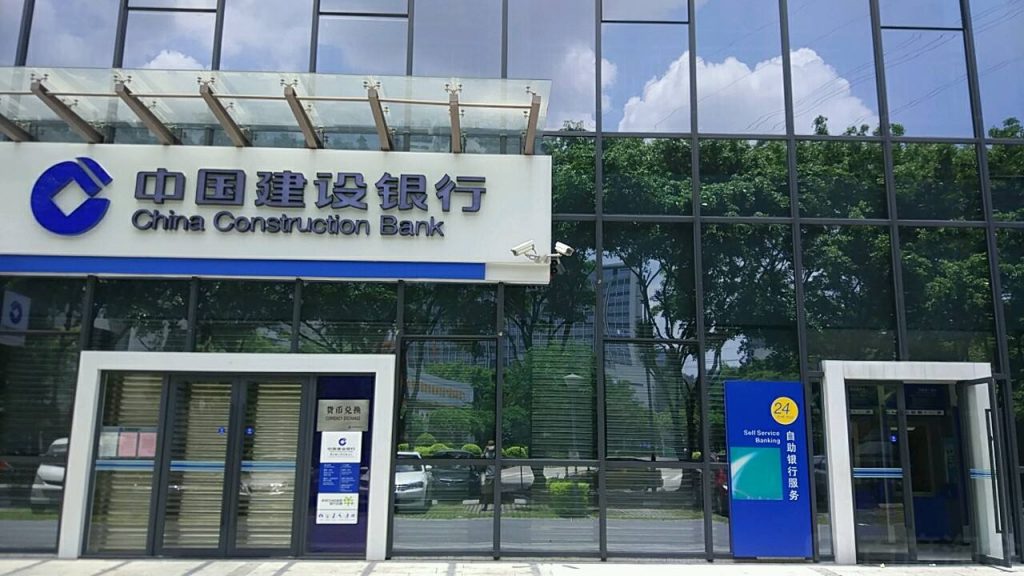 How to Get Around

Experienced travelers will think they have getting around China covered. “Hey man, I’ll just call an Uber.” Alas, Uber existed in China years ago but were driven out by the forces that be. And unless you are you are fluent in Mandarin or Cantonese, chances are you will have problems telling a taxi driver where you want to go. That is if you can even hail a taxi as most are already committed to a passenger.

Sure you think, “I’ll just show my taxi driver my phone of where I want to go.” In my experience this works very poorly. In fact several taxi drivers I attempted this with with told me to get out of their car. At best you manage to tell them what neighborhood you need to go to and you will inevitably get dropped off several blocks from your intended destination.

So what’s the solution for getting around China. The answer is DiDi. It’s a ride hailing service similar to Uber or Lyft but there are some important differences.

Up until the beginning of this year, DiDi did not allow foreign credit cards, thus most foreigners could not use the service. But now seeing the error of their ways DiDi allows the good people of the world to ride with them.

The next thing to know is that unlike Uber or Lyft, you need to approve payment to your driver manually after each trip. This is important because you will need to have no outstanding payments to hail another DiDi. This comes into play when you have a poor internet connection. It will take a while to process your foreign credit card payment. I had several times where my payment would time out and I thought I would do it later but forgot about it. Then when I needed to hail another Didi my internet connection was poor and my payment couldn’t go through. This left me unable to hail another DiDi. If you are able, process your DiDi payment immediately.

If you are traveling a further distance out of one of the cities, chances are you will take a toll road. At some point during or after your trip your driver will tell you that you owe him ¥50, or however much, and you need to pay him in cash. Being a tourist who is paying through the DiDi app you will think that your driver is scamming you. However your driver is telling you the truth. DiDi does not calculate the cost of toll roads into your trip. It also does not give you the option to pay for tolls through their app. Make sure you have cash on you to be able to pay for tolls.

The final thing to know about DiDi is more of a system error. If you are in a situation where you have a few drivers cancel on you in the span of a few minutes, which can totally happen, you will get locked out of the DiDi system if you keep requesting DiDi’s. It’s happened to me twice where for whatever reason I’ve had to request three or four DiDi’s in the span of a few minutes. Eventually the app will say, “No Cars Available.” It seems to be a system error or safeguard. If this happens it usually will let you order cars again in a few hours.

For most people, probably the biggest mental obstacle preventing them from travelling to China is the language barrier. But with the following info you should be well prepared for your trip.

Did you study a couple hours of Mandarin on the plane to be able to say some phrases? Your time would have been better spent reading about the history or the Song dynasty or something else. The reason is because if you are non-Chinese, Chinese people will have a mental block that you cannot speak Chinese. I’ve spoken with expats who have lived there for years who are fluent and they have told me they run into situations where a local claims not to have any idea what they are saying.

But fear not. The fine people of China knew we English speakers were coming so they’ve made getting around and communicating with locals easier than you think.

If you are in one of the major cities pretty much every sign in in both Chinese and English. This goes for things like public transit where subway signs are in English and they even make announcements in both languages. Street signs, signage in malls, signs in parks or even signs put up in the windows of small business are usually all in English. 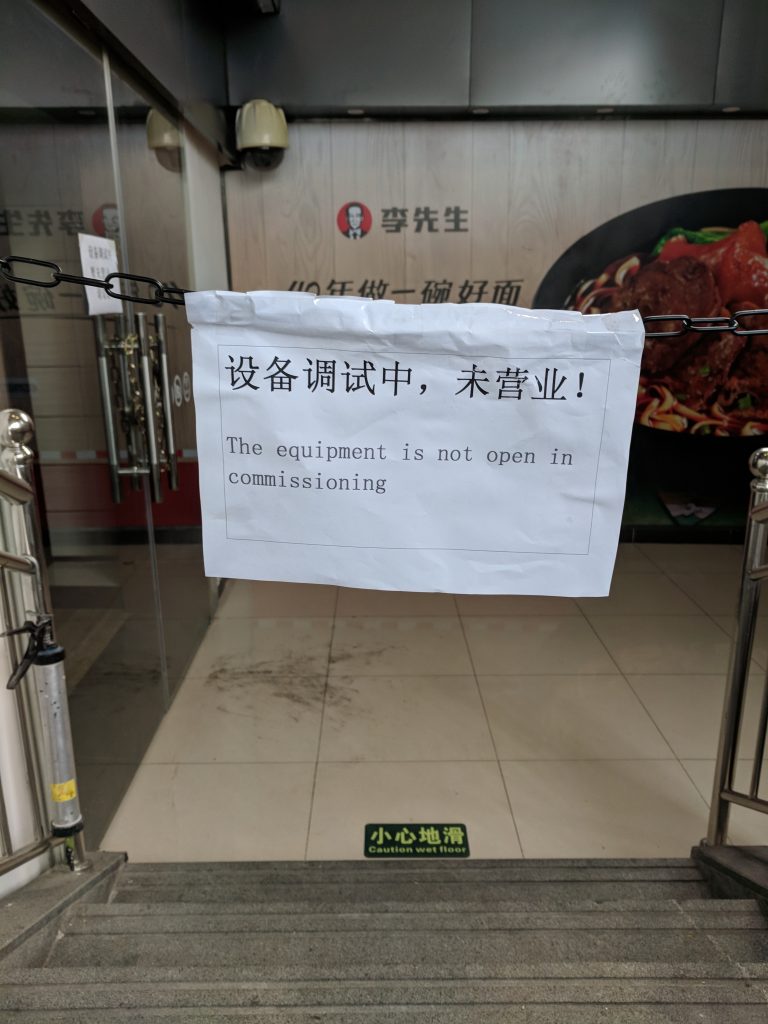 A sign outside of a mall in Beijing. Well you get the idea.

“Well how am I going to communicate then?” Chances are if you are dealing with someone under the age of 30, they speak between some basic English up to fluent. Chinese kids are taught English starting in kindergarten and continue studying it through high school. To get into a university, even in China, they need to know English.

If the person you are dealing with does not speak English at all, I recommend good old Google Translate. Typing so they can read the translation seems to work best in my experience.

If you find yourself in a restaurant with no English and no pictures, ask for an English menu. Some restaurants have them or at least a picture version of their menu. If that doesn’t work and you don’t want to spend 45 minutes on Google Translate ordering dinner, simply type into Google Translate, “What’s your most popular?” I’ve done this on a number of occasions and have been spectacularly pleased with what I’ve gotten.

Is China Worth It?

Yes, it’s a long plane ride and no, it won’t be like going to Orlando. But if you are willing to step just a little bit outside of your comfort zone China will reward you with flavorful cuisine that is steeped in tradition, world class architecture, a modern infrastructure living side by side with old school ways and thousands of years of unique history. In my opinion, it the best travel bargain out there.

Get notified of new Mark Adventures